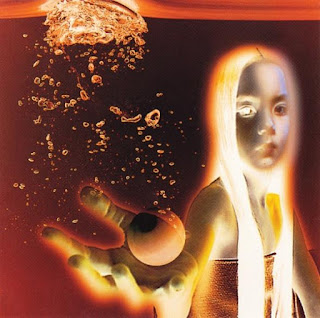 Today's FSOL excursion, is epic in nature and length, clocking in at just under 39 mins with all matter of samples, snippets of astronaut dialogue mix with the cries of exotic birds and the even stranger but gorgeous voice of Liz Fraser floating in and out of the mix. On the back of the 12" single the record is split into 7 "Paths" which can be listened to as separate pieces of music but I think it works best as a single entity to be listened to in it's entirety and once again if not get lost in get very distracted by. The third path is the part of the song that appears on the Lifeforms album which is also worth seeking out. Dougan and Cobain were so far ahead of the pack at this time everything they did was fresh and exciting, whether that be their two Radio 1 Essential mixes within months of each other,  "touring" radio stations down the phone lines (ISDN) live from their studio or the strange videos that they made to accompany these releases which I cannot find on Youtube. The expectation was always high when they released something new and I can't really remember any being a disappointment.

So take 40 minutes out and have a listen.

I'd forgotten how good this is.

It is new to me but I like this soundtrip you gave to my ears. Thank you Drew