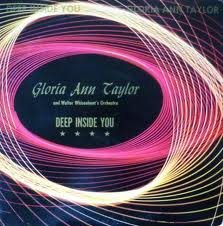 A while back I posted a track by Gloria Taylor which I had stumbled across. I had already decided that I would investigate Ms Taylor's back catalogue before the comment from Darcy, however I would probably not have ventured into the 70s stuff,if it had not been for his comment but because of Darcy's impeccable taste this is where I headed first and after a search on the internet  managed to acquire a download of a 12" single from 1973.

The first track on the a-side Deep Inside You is a smouldering,  slow burning slab of deep soul and similarly track two is very good and these two tracks would make a single well worth seeking out. However the track on the flip side blew me away, a seven minute plus track which builds and builds and which when you get to the end you just have to put on again.

I have scoured the web and there isn't a copy of this 12" to be had anywhere which suggests that copies will be worth a few quid. So I really have to thank Darcy for adding another record to my burgeoning wants list that are likely to cost way above what L will find acceptable if a copy every comes up for sale.

Gloria Ann Taylor - Love Is A Hurting Thing
Posted by drew at 07:30

This is absolutely sublime - thank you.

PS: Found an interesting post about Gloria and this EP here.

Cheers for that Mr H. As is said this does need to be reissued

It's superb isn't it? And the sound is totally unique. I read somewhere I think that only 500 copies were pressed. If you take a trip over to popsike you will see the going rate seems to be $450-1000.

Keep a look out for Total Disaster too. Early 70s on Mercury and more affordable but going up I think.

As much info as I can find right now on Gloria is here: http://soulfuldetroit.com/showthread.php?2063-Gloria-(Ann)-Taylor

Although I seem to remember finding a more comprehensive (and somewhat sad) tale when I was trawling last year.

Thanks Darcy, as ever informative