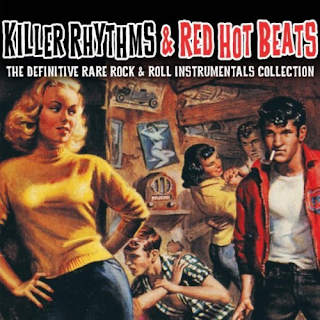 Before Christmas John Cooper Clarke filled in for Jarvis on his Sunday show a few times and was absolutely brilliant, some great anecdotes and patter and even better music stretching back to the beginnings of Rock n Roll. On one of these shows he featured tracks from a compilation of instrumental Rock & Roll tunes which were full of raw energy which just made me want to jump about the kitchen. I duly noted down the name of the album on a post it and put it somewhere. Where? I don't know as when I went to get it I couldn't remember where I put it. No worries I thought I will consult the 6 Music website, which I duly did but to no avail, the tracks were there but no mention of where they came from.

There was nothing else to do but search through Amazon. I couldn't find a R&R instrumentals album that had just been released or was about to be but what I did find was a double cd with 70 tracks called Killer Rhythms and Red Hot Beats for under a tenner. Bargain I thought as i moved the mouse to the 1-Click ordering button.

On arrival the cd did not disappoint, sure a lot of the tracks are quite similar and rough sounding but the fact that most of them are around the two minute mark means that you don't get bored with them. A word of caution though, if you are one of those people who can't stand the sound of the saxaphone and I know there are some I would steer clear of this comp as there is widespread use of the instrument throughout. Other than that I can heartily recommend this.

I'm down in Luton for a couple of days, deep joy!

Here is one of my many faves from the compilation.

Rodney and The Blazers - Summertime Rock
Posted by drew at 07:00

Luton- so much to answer for.

By the time you read this you'll be all cosied and jim-jammed up watching Lionel Messi within Kenilworth TravelTavern's noisiest room, eschewing the 'turn-down' service but ordering a beef and horsey radish sauce on a crusty roll - deliberately warmed up in a bid to disguise it's age. You'll be missing the kids and yer own bed and the view of the wee roundabout across the snowy Scottish road. You'd go into town for a couple of quiet bevvies, but that would be akin to popping down to a bluenose bar wearing green n white hoops.

Are you spying on me DVD, because that's nearly spot on. Hilton Garden Inn Hitchin, soulless fucking place.