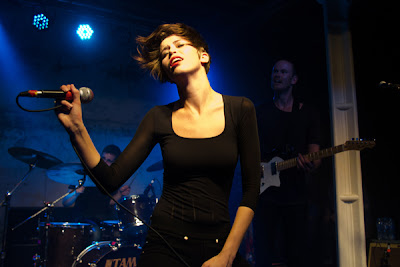 Going to see this mob at Oran Mor was one of my gigging highlights of last year even although they did not perform Disco Biscuit Love,  my absolute favourite. The energy levels of the lead singer Hayley Mary never dropped and I was knackered watching her dance across the stage, no wonder she is so thin! She also has a very impressive voice with quite a range.

No such highlights to report this year, we are already in March and I haven't been to a gig yet. Nothing has really taken my fancy apart from The Joy Formidable who had sold out Oran Mor by the time I got my arse in gear to get tickets. There isn't much on the horizon either apart from Billy Bragg at the Concert Hall.

This track comes from the group's first in a series of three eps, She's So Hard and was released in 2009. Their debut  album was released a year ago this month and I must admit was rather overlooked and neglected as I had had a snidey download from the previous November and had kind of played it out before I got my hands on the vinyl. I think that it may get an airing sometime this week.

The Jezabels - Violent Dream
Posted by drew at 07:00

Mark E Smith 56 today..and no track from you?

No George, he can fuck off. No more from me until he gets off his arse and releases some good new material

Ooooh! I didn't know them until I read this. Thanks for the introduction.

She has a great voice.

Love the vivid and quirky lyrics too.

Loved Disco Biscuit, which I discovered here so thanks, but the album was a one-note storm of dancerock that left me cold. Kept trying until I reached that point: "No, it's not that I haven't listened to this enough. I've listened to it plenty and I don't like it."