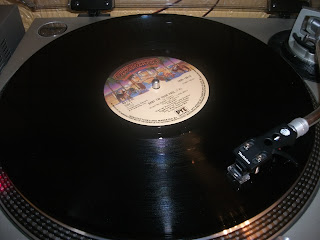 Well I hope you got everything from Santa that you wanted  or that it was at least practical.

I have spent a good part of the last couple of days building up up either Lego, in the form of Star Wars, Lord Of The Rings and Monster Fighters or Mega Blok's Spider Man and Halo and feel enough of an expert to state that Mega Bloks are shit in comparison to Lego, the instructions are crap and the blocks don't stay together like Lego does. Moan over.

When I was in Glasgow last Friday getting L's presents I also had a chance to visit my favourite charity music shop and have to say had a pretty successful trawl through the racks.

While looking through the 12" singles I noticed three in the famous Casablanca sleeve that I thought were worth further inspection. Two of them were pretty rough when I looked at them but the third looked in good nick, it was by the Pips but what piqued my interest was that wriiten and produced by Bunny Sigler, responsible for a couple of good northern tunes. It had also been remixed by Tom Moulton, the "father of the disco mix" who was responsible for a rather fine mix of the Carstairs "It Really Hurts Me Girl" recently unearthed and released on 7" on the Inferno label. So I decided that the record was worth a punt at the asking price of 50p.

I suspect that this will be right up Darcy and Davy H's avenues.

I'm having this one as well. 50 pence well spent.

Playing this again strikes me the melody is almost identical to the chorus of Bobby Womack's 'Daylight'.Can't believe I didn't notice it before, must have been the drink. On which subject, is it Friday yet?