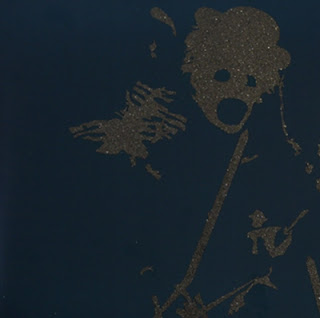 I have thought long and hard about posting this in it's entirety as it is brand new. I don't generally do this, if a new record comes out then if I think that others may like it I will post a track off of the record but not the whole thing. But a couple of factors have pushed me into posting both sides.

Firstly, this is a limited release, only 1000 copies were pressed, with no repress and no digital release. I think that both of these tracks need to be heard by more than the maybe six hundred or so people that have bought the record to listen to. Which brings me onto my second point.

Even before the release date their were copies of this for sale on ebay with a starting price of north of a hundred and fifty quid. The single was originally on sale for £25 but somehow without doing anything other than clicking a button someone decides that they should make six times that amount. This kind of shit really pisses me off. These gets have got copies over fans who would love to have the record just to listen to,  for the sole purpose of making money. That is not what music is all about.

I know there are loads of people who say that a record such as this should never have had this sort of exclusivity as there are so many people who would be interested in this collaboration and you know, they are right it should have been made more available in some format, maybe a bog standard 12" single or cd. But it was decided that the record would be released the way that it is and I was lucky enough to get a copy.

One thing I can assure you of is that the record will be played as have the two previous Massive Attack limited editions from the vinyl factory. Yes the covers are beautiful but records are meant to be played and records that are so lovingly produced using the very best press and true craftsmen deserve to be played and not sealed away as some sort of investment.

It is my hope that by posting this single, there is a little less interest in the vinyl copies on  ebay put there by vampires who have no interest in the music and are only out for money. I realise that they will still sell for the reasons above but if they make even 10% less than they factored for I will be happy.

So much for the bullshit Drew, I hear you say. What you want to know is how do the tracks sound. The answer to which is absolutely fucking wonderful. What else did you expect?

I would download as soon as possible as I feel a DMCA notice winging it's way to me as I type.

Massive Attack vs Burial - Paradise Circus
Posted by drew at 08:45

Email ThisBlogThis!Share to TwitterShare to FacebookShare to Pinterest
Labels: Massive Attack vs Burial

Thanks Drew. Caught some 'streams' of these but it'll be good to have a proper listen.

Totally agree with you.
Thank you.

superb tracks and to be shared indeed:
thanks ^_^

thank you SOOO MUCH! I missed out on the pre-order, b/c at first I thought "oh there's no way it's ONLY going to be a limited 12" (assuming that there'd at least be a digital release, like the 'Atlas Air' single) ...but no... of course not

likewise gutted to have missed out on the pre-order.

I agree w/ yr reasoning too and have to say a big ta for being able to listen to it now finally as well.
BIG ta's
Regards/

In a twisted way I feel like it was released this way to promote a public sharing of the work. I have had it digitally for a couple weeks...a gift from a friend. Something so beautiful should be shared, like a good wine, a wonderful poem, an exciting story...

This is superb, I for one would not have heard this if you hadn't posted. Bollox to excusivity. many thanx, hp

and bollox to exclusivity an all...