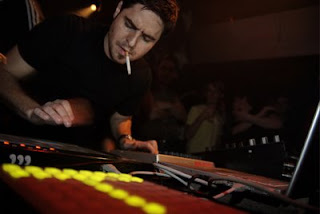 At the end of last year I was bemoaning the lack of what I considered to good full albums that had been released and was pondering why this was so. Was it due to artists padding out albums with filler which bored me. Or had I just fallen out of love with the format, the concentration span not being what it once was? Never ever came to any conclusions but erred towards the later position

Things have been very different this year. There have been over a couple of dozen albums which I have bought over the last 10 months that I have neither got bored with nor have felt the need to get up and lift the needle or press the skip button on the remote control.

One  such piece of work which I had been looking forward to on the strength of the previous offering was Gui Boratto's third, simply titled III. The Brazilian architect/minimal producer/DJ has come up trumps again with an album which although breaks little new ground does work as a whole album but most of the tracks would also fill the dance floor in any discerning club, tracks like Flying Practice and Stems From Hell.

III is well worth checking out, especially if you liked the previous one or his remix of Paradise Circus for Massive Attack. The track featured employs the vocal talents of Luciana Villanova, otherwise know as Boratto's better half.

I've been loving this guy's stuff for the past few months now, ever since I heard his remix of Massive Attack.

Check out his XLR8R podcast from the end of August if you get the chance, it's rather good (and free of course!).

Cheers as ever for the music,

Very good that is. Got a couple of things by him following the MA remix.