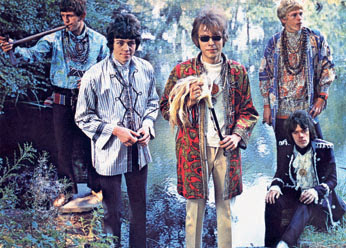 I am not that well versed in the recording catalogue of the Move and know very little about the band except that they were the first band played on fabulous Radio One by John Peel's nemesis, Tony Blackburn and that they were from Birmingham. I Can Hear The Grass Grow was the band's second single and got to # 5 in the UK singles chart in 1967.

The Move - I Can Hear The Grass Grow

The Fall covered the song for their 2005 album Fall Heads Roll which in my opinion is one of the best things they've done in the last ten to fifteen years. On a sadder note it was also the last track they recorded for their final Peel session, shortly before he died.

Email ThisBlogThis!Share to TwitterShare to FacebookShare to Pinterest
Labels: covers, The Fall, The Move

Have you heard the new gang of Four album yet?

I know it's a terriblee thing to say but I never really liked Gang Of Four, not sure why but they just never did anything for me.

I may give the album a listen on Spotify to see what I'm missing.