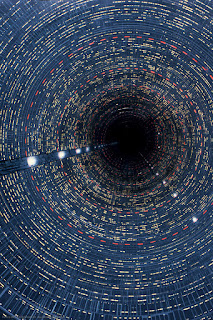 I'm not sure if something can be both ambient and techno but if it can then this is a prime example of that sub genre. Time Square came out in 1994 and is something of a lost classic in my opinion. It's not a record that I have heard many people talk about in the intervening twenty six years, maybe because nobody could categorise it, it didn't find an audience or maybe it was a huge record just not in the circles I frequented. At times I think it is quite similar to the kind of stuff that Basic Channel were producing but it doesn't have that hard edge that you will find on that imprint. The original release comprised of three parts and over 50 minutes of music on one 12" piece of vinyl, the repress from 2018 which I own only has parts 1 & 2 and lasts for 38 minutes. The record came out of Cologne and was apparently made using second hand drum machines and broken keyboards by Igmar Koch and Can Oral. No matter how it was made it is a masterpiece.

I listened to this late last night, at the end of a very long day at work, while consuming my second glass of wine. Both the wine and the tune went down perfectly.