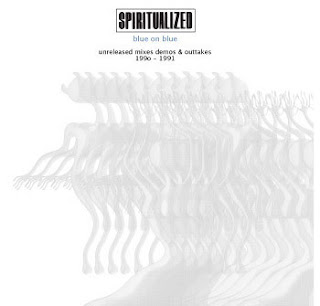 Back in 2007 Will Carruthers made two cds available by mail order that consisted of outtakes and rehearsals of early Spiritualized recordings. On the communication regarding the Blue and Blue compilation he stated

"This will be the last of these
I feel that it hurts nobody
It is very limited, and I guess, is of specific interest to a small, but loyal following, only a percentage of who will actually buy it.
You, presumably want to hear it, and I, finally make a little return on the
work that I put into these songs all those years ago,
I really enjoyed listening to this cd and it brought back some of the good times that I had whilst being involved with thee making of this music
I hope you find something you like.
If you could bear not to make these freely available to share for a month or so, you might give me the opportunity to flee the country before i am crushed like a bug by some monolithic organisation
Thank You
Will Carruthers"

Not only have I never heard this before, I didn't even know of its existence. Love it.

Read his book Playing the Bass with Three Left Hands this year, heartily recommend, he was and no doubt many others in other bands was royally f*cked, Spaceman 3, always have and always will love, spectrum/spiritualized(ladies and gentleman an exception)/sonic boom less so, for who I blame ruining Panda Bear, though he added something to Beach House