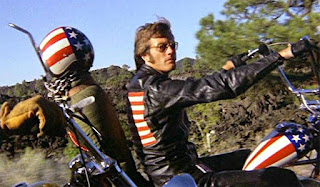 Another of the main figures of late 60s counter culture gone. I've loved Easy Rider from an early age and for a scooter lover I always wanted to own one of the choppers in that film but not Captain America's but Billy The Kid's which always looked cooler to me anyway.

Rest easy Peter for me you had more of an influence on films and filmmaking than either your father or sister. And lest we forget his part in possibly the best indie/dance record of all time, Loaded.

YouTube won't let me embed the Easy Rider clip I wanted and it appears that the only version of the Ballad of Easy Rider I have ripped is the Kathryn Williams one which in it's way is better than the Byrds one.