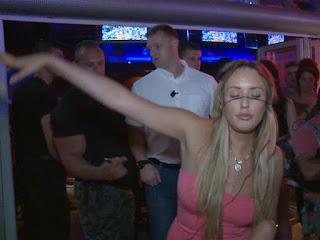 Nobody will have been waiting for this to rear it's ugly head again but I can't think of anything else to fill a Friday with so there you go. Here's a bit of early Dutch Techno from way back in the early days raving. Techno Trance was the flip side of Yaaaaaaaaaah, a very basic one dimensional bit of techno  but we are talking about 1990. Techno Trance isn't really a track with much depth either but when it's 02:00 am and you're eccied out your nut who needs depth, what you need is a pulverising beat and repetitive shouting of "c'mon, wooh". Not the subtlest but somewhat effective.

It has been a pretty ignominious start to the season for the Diamonds, a two nil home defeat and pitiful performance  against Forfar on the first day of the season and a narrow one nil away win at Montrose last week. Let's hope some sort of gelling has happened and we get a better performance at the Excelsior tomorrow against Clyde but I will not hold my breath. Still we do have a home tie against Irish side Bohemians in the Tunnocks Caramel Wafer Cup next month to look forward to. Onwards and upwards as they say.

The Diamonds are going to get it together this season. I base this on, well, nothing.

Eternal, groundless optimism is what makes football fans come back at the start of each season Brian. Quickly followed by a sharp dose of reality before the end of August.

It looked that way during the first half SA but an amazing second half, three good goals , 4 very near misses and an absolute belter of an over head kick in the 92 minute. Gotta love football. Bri maybe correct.