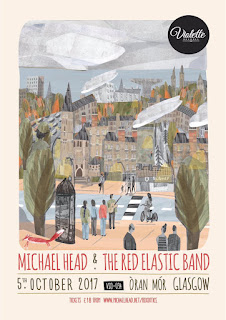 I'm in Luton today and tomorrow, deep deep joy. But I am getting away early tomorrow to catch the earlier flight as I'm off to see Michael Head and The Red Elastic Band at Oran Mor. To say that I have been looking forward to this gig would be a bit of an understatement as the last time he played Glasgow I was also away with work but unable to get out of. I expect the set list will consist of a lot of Adios Senor Pussycat the much anticipated album due out on the 20th of this month but I'm sure that there will be a smattering of older tracks from his days with The Strands and also Shack but not sure if any Pale Fountains songs will be aired though.

A fine song today Drew. Not as good as Otis but still well worth listening to.

Just back home from my trip to Cadiz - which was insprired by a Michael Head and The Red Elastic Band song of the same name - and ALL of Michael Head's career made for a wonderful soundtrack to exploring the Old City, its winding and narrow streets, sipping Manzanilla in corner tapas Tavernas.
I hope you hear everything you want to hear at the show Drew - Natalie's Party, Comedy, Newby Street, X Hits The Spot, Walter's Song and Glynys And Jacqui would certainly be among the songs I want to hear.

You've got me excited for the new album. Be safe on your trip, brother.

Have fun at the concert Drew. I sadly had no chance to see them live. Looking forward to a short review of the gig.