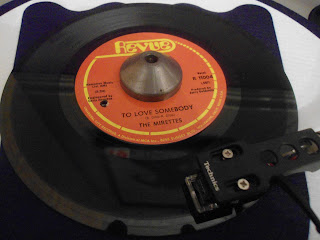 When ripping this version of  probably my favourite Bee Gees song I checked my iTunes first to see if I had already uploaded the song and was surprised to find that I had a further ten versions of the song by people as diverse as Sunday's Child to Primal Scream, yes the Scream version is every bit as dreadful as you are probably thinking, Bobby G's vocal being particularly woeful. So I suspect that there is a lot of love out their for this track.

The Mirettes have featured here before with the single that followed today's 1968 offering. The vocal group were the Ikettes until they changed their name after they left Ike and Tina Turner to strike out on their own but were not allowed to keep the name.

The Mirettes - To Love Somebody
Posted by drew at 08:00

Nice version. Nina's is hard to beat, but I've always liked this one too. https://www.youtube.com/watch?v=644dZ4-h64M

CC - that is very very good thanks. Another to add to the collection.

So is that one Swede, love the drums