Debut Album Side One Track One 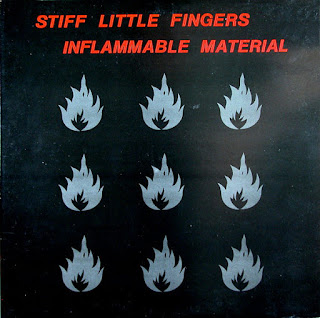 I caught some of one of Steve Lamacq's shows last week on 6Music, not sure what night it was but I think it could have been Wednesday or Thursday. I don't listen to him that often but I really can't be fucked with PM or the ^ O'clock News on Radio 4 at the moment  it's all about the UK staring into the abyss, getting ready to jump off,  or bloody Trump and more depressing still Syria and when you look to the 18:30 comedy for some light relief all you get is pish that is not at all funny with the exception of the Unbelievable Truth and the Now Show which I like so I know it wasn't Monday or Friday but I digress.

The stick insect in the DMs and the washed out indie T shirt was going on about the first track on the first side of debut albums which I think started due to him playing Janie Jones as last week was 40 years since The Clash was released and he was saying what a powerful opening salvo the track was. This got me thinking and probably every middle aged man tuned in also as to what the best opening track on a debut album was. As I have been going through something of a Jesus and Mary Chain obsession recently as some of the more acute of you may have realised, of course I initially thought of Just Like Honey and then I started to think of other memorable ones such as Foxey Lady on Are You Experienced, Sunday Morning from the first Velvets album and Fallen from Morning Dove White amongst others. However, for me anyway the ultimate song one , side one of a debut album has got to be Suspect Device from Stiff Little Fingers 1979 debut album Inflammable Material. Has there every been a more raw, visceral statement of intent.  Even now when I put it on I still fear that  there is an outside chance that my turntable might spontaneously combust, the energy in that track has not diminished one iota in thirty eight years.

This has probably been done before on more than one occasion in blog land but I feel a beginnings of a new series here that I could flog to death. We'll see.

Absolute fantastic Drew. I love this record from ever heard the first chords. I think it is a fantastic idea for a new series. Looking forward to it.

Good call Drew. I heard Lammo develop his theme off and on throughout the week, but I didn't hear SLF mentioned - a cracking selection. Buzzcocks' 'Fast Cars', 'Personality Crisis' by The New York Dolls and 'Gloria' by Patti Smith are other great openers that I assume must have been proposed at some point.
Like him or loathe him though, as statement of intents go I plumped for Meatloaf's 'Bat Out of Hell'. Some may argue that he might as well have packed it in after that one track (not me though Rol :-)) as it encapsulated absolutely everything that he's striven to recapture since.

I Wanna Be Adored sets the tone for the Stone Roses pretty well. Wash of effects, low rumbling bass and then Squire's liquid guitar.

Great song and idea for a series. The examples given in the post and comments are all wonderful too. Let's keep this thing going. Side 1 track 1 made for a funny scene in High Fidelity too.

I love this album. Been using Johnnywas as an online name for nearly 20 years, and going back to the 80s it was my musician name when I was thrashing guitars as a teenager.

The sheer attack of those opening chords *, coupled with the snarling vocals, must rank it highly, if not the top spot, of Album 1 Side 1 Track 1. The rest of the album is top notch too - even managing a fine take on nascent Punk-Reggae (Johnny Was).

Thinking of albums from my formative years and there abouts - Going Up from Crocodiles by Echo And The Bunnymen and Show Me from Lexicon Of Love by ABC immediately came to my mind.

Drew may have something to say about Show Me... if I remember how he feels about Lexicon of Love. Nothing divides our group like that album, but I'm with you, Echorich.

Great bit of writing Drew. Could be a series that you invite guest postings??

I'll suggest Disorder - Joy Division as being one that lit the touchpaper on a debut LP.