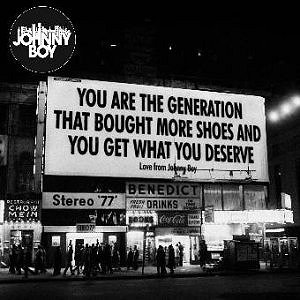 There is a parallel universe somewhere, where a thinner and less "gone to the dogs" version of myself listens to one of those oldies radio stations that only play the highest ranking singles from the past. The alternative version of myself loves this station because in that reality things such as Keep On Keeping On, Stupid Thing, Forest Fire and There She Goes all topped the charts with whole load more that I could list that failed to entertain or inspire the great unwashed in ours.

In that other place in Apil 2004 this record came out of nowhere soared up the charts making it to the top in a fortnight and resided there for twenty four weeks until something equally deserving knocked it off.

Johnny Boy - You Are The Generation That Bought More Shoes And You Get What You Deserve
Posted by drew at 08:30

Heard the title before but never the song. It's very good.

That's a world I would very much to live in meself, Drew, although all the titles you mention ring a bell apart from 'Stupid Thing': whom was that by, please?

Dirk - Stupid Thing Is by Paul Quinn & the Independent Group. JC has posted about it a few times