My World Is Empty Without You 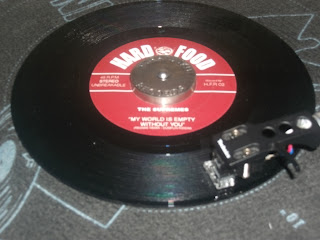 As I mentioned on my review of the non event that was the Fall at the Arches at the tail end of last year, the best thing about it was the dj set by JD Twitch and one track in particular got under my skin and that was the Manjah dub of the Supremes,  My Heart Is Empty Without You, one of my favourite track by the most successful girl group of all time.

I decided, as I do that the download that I had was not enough and started to seek out the 12" single that it featured on but to no avail. But during my search I came across a reggaefied version for sale on 7" and on the b-side it said instrumental which I took to mean a dub version as appear on the flip side of a lot of reggae singles and so I decided that it was worth a punt.

The single duly arrived and I played the b-side and was slightly disappointed that it wasn't the dub that I had heard at the Arches but when I flipped it over and heard the a-side I was duly impressed, whoever it was that had done the mix had made a spot on job and for the first time in my life I was hearing Diana Ross' vocals to a reggae beat.

I suspect that this single isn't entirely legal but it's good all the same.

The Supremes - My World Is Empty Without You (Reggae remix)
Posted by drew at 07:00

Its a belter that one Drew

La Ross on Trojan, who'd a thunk it