Not One Day But Now 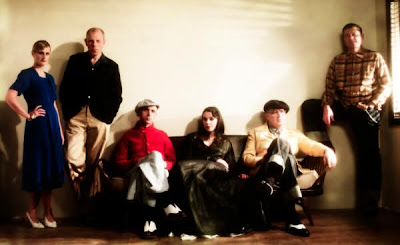 You might have noticed a distinct drop in activity over the kitchen table over the past few weeks. The reasons for this are two-fold.

Firstly,  work has been steadily encroaching on my personal life, so much so that I have been working most evening when at home as well as when away, which is far from good. And it looks as though it's going to get a whole lot fucking worse before it gets any better.

The other reason and the main one if I'm honest is that all I want to listen to at the moment is Dexys and therefore all I really want to say is you need to buy One Day I'm Going To Soar as it is fucking amazing and hearing  that day after day may get boring which certainly isn't true about playing the album.

Oh,  and once you've played that for about a week solid go back and listen to and reappraise Don't Stand Me Down which also,  twenty seven years after it's initial release is fucking brilliant.

It's not as if I haven't bought anything over the past six weeks or so; there is a double Lee Scratch Perry dub album, the latest offerings from Moon Duo and The Raveonettes and quite a few others that need to be given some attention but I just seem to be stuck in a groove where only six sides of music are doing it for me at the moment.

Work got in the way of seeing them live at the Queen's Hall in Edinburgh a few weeks ago which by all accounts was a brilliant night. But hopefully due to the success of the tour they may tour again soon (fingers crossed).

So here is a track from that album from 1985 which was much maligned not least by yours truly and a performance of one of the tracks from the latest delve into the life of Kevin Rowland from the appearance on later earlier this year.

I've come round to thinking that blogging a bit less, but making it count when you do, is no bad thing.

Completely get your point about wanting to play the one thing over and over though: I have that with things.

Hello!
I've followed your blog religiously over the last year, and thoroughly enjoy the diversity of the posts, recognising some and loving having my ears opened to others.
When it comes to Dexy's I'm there. I'm in. I'm sold hook line and sinker.
I've worked as a high street DJ for the last twenty years playing the lowest common denominator music to the drunken masses, and the best times, without doubt, have been playing the last two Dexy's albums on the drives home from various northern towns to cleanse my soul.
And ears.
Don't you just love it when music can do that??
Keep up the good work.

Thanks for the kind words EDJ.

I used to dj in a local pub and loved slipping in something that I knew the majority hated but if I saw atleast one head bobbing, I thought result.

To cleanse my soul it always Just Loving You by Ruby Andrews, works a treat.