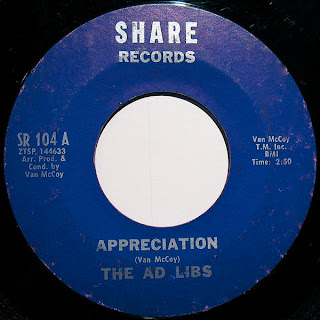 Ally over at Dusty Sevens posted the the Gladys Knight version of Giving Up on her torment Tuesday which had me digging out my version by the Ad Libs and firing it on the turntable forgetting that the labels are stuck on the wrong side I accidentally put on the plug side Appreciation and was shocked at how good a track it was and chastised myself for not playing it more.

So here for your listening pleasure is the A side of the single, also written and produced by Van McCoy and released on Share Records in 1969.

There will be nothing to see at the kitchen table until Friday as it is half term up here and I will be away for the week with the in-laws,  all eleven of them! for a week of absolutely no rest or recuperation.
Posted by drew at 07:30

A week with the in-laws?? Crikey. Be strong.

I know guys, I know!

if you like it, you can write about it. Just that, greedings from greece.
vagmood.blogspot.com