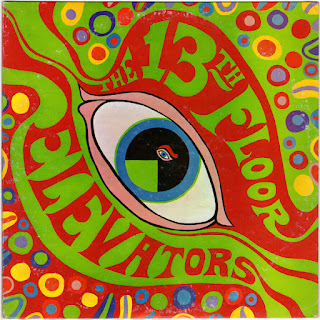 I was surprised to learn the "You're Gonna Miss Me", track one side one from the debut album, The Psychedelic Sounds of The 13th Floor  by Austin band The 13th Floor Elevators had reached # 55 in the Billboard charts when it had been released as a single prior to the album. The song a Garage  staple these days hinted at what could be found on the first acid rock album. Indeed on the sleeve notes the band proudly proclaimed the up sides of taking hallucinogenics which only made them a target in the eyes of the authorities and from then on being frequently searched by the police in their native Texas.

The debut album which is rightly considered a classic and the follow-up Easter Everywhere would become influential in the alternative rock scene with the likes of REM, Spacemen 3 and Echo and The Bunnymen covering their work. By 1969 the band had disbanded after releasing their third album and lead singer Rocky Erikson being voluntarily admitted to a psychiatric hospital rather than go to prison on possession of marijuana. The treatment that he received may have contributed to the mental health issues that dogged him until his death last year.

Two top songs to start this series with Drew

Have a feeling I'm going to enjoy this little series Drew, two great songs to start it off with.

Roky Erickson... a pioneer that has always deserved more attention. Unfortunately, most artists this brilliant aren't appreciated until long after they are gone.

What they all said.