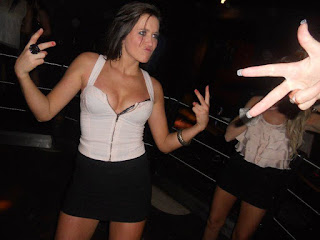 There seems to be some suggestion that today's track isn't from the golden age of House music but a tune that has been made more recently and made to sound like it's from that period, the 12" single that it is the flip of was released in 2006 but that doesn't mean that it hadn't been doing the rounds previously. Whether or not it's from the mid to late 80s or early this century it sounds bloody marvellous to these ears. I am no expert on Marcus Mixx's music or what came out of Chicago in the mid to late 80s and does it really matter a great House tune is a great House tune. I do know that I hadn't heard it prior to 2013 when I purchased Terry Farley's excellent Acid Rain 5 disc boxset. Simple but very effective, repetition being the key.  I have noticed that the price of a lot of classic house and acid 12" singles have rocketed recently. Is House music becoming the rare soul for younger music collectors I ask myself.

Andy fucking Ryan did it again on Saturday netting one of the two goals away against Peterhead and another clean sheet into the bargain. The Diamonds are still three points behind Falkirk and four worse off than Raith Rovers both of whom have a game in hand over Airdrie but in this bonkers league you still never know. Let's hope that another away win is on the cards tomorrow at Montrose.

Marcus is one of the forgotten greats of the early Chicago scene.

I thought that you may know if this was released way back then Echorich or whether it was a newer sound?