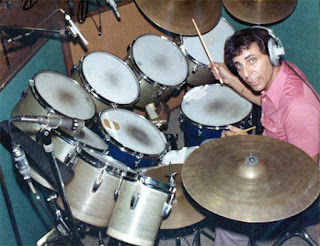 Very sad news that the drummer responsible for the most distinctive and possibly copied drum intro of all time on my favourite single of all time has died. He also was the drummer on many of the best records of the 1960s.

A few years ago I had a playlist called Boom Boom Cha!, which really should have been Bum- ba-bum-BOOM and was filled with tracks that included the drum break mentioned above. I think before the playlist was wiped out after one of my iTunes crashed I had 25 tracks that had "borrowed" that famous intro and that list was by no way definitive.

I have often wondered if Hal Blaine was as proud of that intro as he should have been, he has stated that it was a mistake and he had accidently missed a beat but was told to just keep doing that by Phil Spector. Or did it niggle at him all of these other drummers ripping him off. I don't think that it would have bothered him too much as when you have played on over 6000 tracks, 40 number 1 hits, 150 top ten songs and possibly the only drummer to have played with Sinatra, Elvis and John Lennon you can take it in your stride when you hear others imitate you.

Here are just some of the songs that you will know but may not have been aware of who the drummer was :- He's A Rebel, Rhythm of the Rain, It's Over, Surf City, I Get Around, Mr Tambourine Man, Strangers In The Night and Cecelia.

The Ronettes - Be My Baby

Barry Maguire - On The Eve of Destruction

What a legacy to leave behind

I've just written something similar for tomorrow at my place. As CC says, what a legacy.

You'd be happy to have played the drums on just one of those tracks, let alone all of them!

Nicely done Drew. What a legacy, what a life.