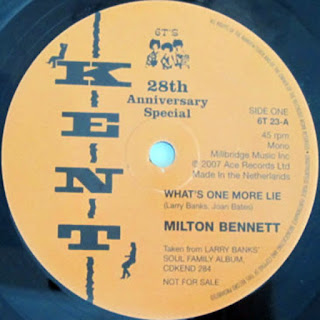 An apt question in these troubling times.

I know absolutely nothing about this track apart from up until 2007 it hadn't been released on vinyl, when it was pressed up and given away at the 100 Club's 28th Anniversary. It will set you back upwards of £125 to get a copy now!,  this absolutely glorious piece of heart on your sleeve soul had been included in an instrumental version on the essential Kent cd GWP NYC-TCB from a couple of years previously. I think that I prefer the instrumental but then again that was the first version I heard so maybe that's why.

The Milton Bennett Band - What's One More Lie
Posted by drew at 08:00

Hey Drew. Two things. I just got the latest Mono newsletter, and they are touting that Basement Beehive box I mentioned on my reissues list. Worth the trip into the city, methinks.

Now, about this song. I’m leaning towards the instrumental as well, but both are excellent and so different from each other. That vocal version is manic and makes me a little anxious. Very effective. Glad you pulled this out. Can’t go wrong with Kent.

Thanks Brian, I will have to visit over the holidays