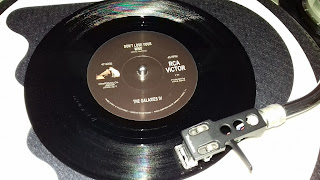 I don't normally post both sides of these old garage records as usually tone side is far superior but that's not the case with today's single from that golden year of , you guessed it 1966. I really can't decide which one I prefer and usually play both when I dig out this single. Piccadilly Circus was the second single by the Galaxies IV from Trenton New Jersey and was originally released on the Mohawk label. The song is a cover of an instrumental Rolling Stones  tune, 2120 South Michigan Avenue, with added fuzz guitar. The tune came to the attention of an RCA A&R person who picked it up for a national release. The flip side, Don't Lose Your Mind is a furious slab of garage rock that builds and ends in a great furious freak out. The record did grab the attention of radio stations but unfortunately the listeners were unable to get their hands on the record as it's release was halted by a strike at the pressing plant meaning that only the promo copies and a very few of the release were ever in circulation. The record was eventually repressed last year in a limited run of 200 copies.