Bank Holidays When I Was A Teenager 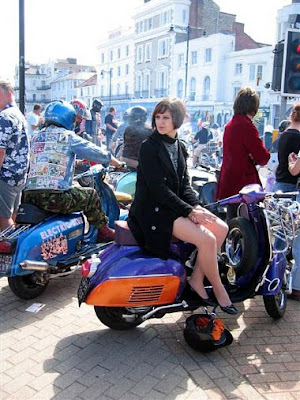 This was first posted back in May 2010 and again last year but I had quite a heavy weekend and yesterday was spent in "recovery mode" and thinking of what to post was way down the list of priorities, thinking alone was quite difficult. Not helped by the fact that the trains weren't running and L and I had to spend 2 hrs 20 mins on a bus home from Glasgow for a journey that should take 50 mins. Not good when you are really hung over and your breakfast is trying hard to make a bid for freedom from your stomach.


Way back in the mists of time when I was a teenager,  Bank Holiday weekends meant endurance tests.

As part of a scooter club you were expected to go on scooter runs. There were a series of National events organised throughout the year, with the Easter Weekend, usually seeing the first and then periodically until the last at the end of October and all bar one would be south of the border meaning that the Scots always had a considerable distance to go.

I don't know how many of you are familiar with the delights of riding Lambrettas or Vespas, so I think I should explain a little.

These feats of Italian engineering  usually have an engine capacity  between 125 and 250 cc and a top speed in the region of between 55 and 80 miles per hour. They are designed for zipping in and out of traffic in Italian cities not for riding twos up with a load of camping gear, supplies of Buckie and a change of clothing (if you were like me and had some semblance of personal hygiene) from say, west central Scotland to the South Coast of England.

As a result of the design of the scooters and the punishment of travelling such long distances an AA or RAC membership or preferably both was as essential to a scooterist as 2 stroke oil and it was not unknown for scooterists to attend runs courtesy of the RAC and then get home with the assistance of the nation's forth emergency service and vice versa. When traveling to runs it was common to see groups of scooterists performing what is the mechanics version of open heart surgery on the hard shoulder to their beloved machines. There was one member of our club who did away with luxuries such as a tent or a change in clothing in order to carry with him all the components of a spare engine.

When you did eventually get to the camp site, which was usually the shittiest bit of waste ground in or near the town, the real problems began.

"Who's got the tent?" was the first cry and if the person who was supposed to bring it remembered and it hadn't fell off the back of the scooter during the trip you were off to a good start.

"Where are the poles?"

"What do you mean you haven't got them?"

This scenario I hasten to add was not as rare an event as you would think and resulted in  some novel methods of tent erection being employed.

Once the tents were up, it was time to find somewhere to drink. This  usually entailed trying to get a couple of thousand scooterists into the two or three pubs in the town which hadn't barred us before we even had a chance to do something wrong.

When all else failed you ended up spending a couple of days drinking warm cans of lager and eating crap from the dubious burger van on the camp site, using what could only in the loosest term be called washing facilities and not sleeping due to the real chance of being run over by some drunken scooter boy who has decided that it is a good idea to ride up and down the camp site in the middle of the night after drinking Buckfast and lager all day while also toking on more weed than your average Rastafarian would consume in a week.

Then after a couple of days without sleep and after drinking too much it was time to get back on your machine if it had not been bundled into the back of a van during the night by some shady guys, (you know who you are) and ride the two to three hundred miles home praying to god that you don't hole a piston or have a seizure on the road home.

As you can probably guess scooter runs weren't my favourite weekends away. Being a lightweight who enjoys the finer things in life such as a flushing toilet, running water and a bed, going on these expeditions wasn't high on my list of priorities and I attended 2 to 3 a year if really unlucky. I did have friends such as Stiff, Gordon and Mick who would try not to miss any, always had a ball and came back with some brilliant tales of hedonism and pure stupidity that if I were to re-tell would not be believed but all did in fact happen. They even made the trip down to Margate, a particularly gruelling journey only to find that the scooter run was actually the following week!

So in celebration of Bank Holidays of the past, here is a particular favourite northern soul track of our scootering fraternity, the LSC (Lanarkshire Scooter Club).

Great piece. My bank holidays have never been so action-packed, even in my teenage years.

Greta piece. remember it from first time around.

You should bring photos of the scooter rides with you when the weekend comes around...

Ah, another terrific tale from your youth, Drew. To be young again...

Oh, WOW! I love this track!