Your Love's Too Strong 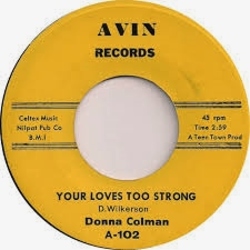 I know virtually nothing about this track apart from it would cost you north of £300 on 7" if you could find a copy. I don't think that if you were ever to track down D Wilkerson and ask if he/she was influenced by the Motown, I don't think that there would be any point in him/her denying it as this has the sound of 2648 West Grand Boulevard, Detroit all over it, however the record apparently is a Chicago release. it reminds me a lot of Martha Reeves and the Vandellas. I love that bit at about 1:30 when the piano stops and just the drums and vocals continue.

Donna Coleman - Your Love's Too Strong

If you hadn't told us Chicago, Drew, I would have guessed it was a Detroit release too. (The singer's voice also puts me in mind of Rose Battiste of "Hit and Run" fame on the Ric Tic label.)

Guess Avin label's only claim to fame is that Andre Williams recorded 2 (of the 4 released)singles for the label. GREAT Female N.S. sound!