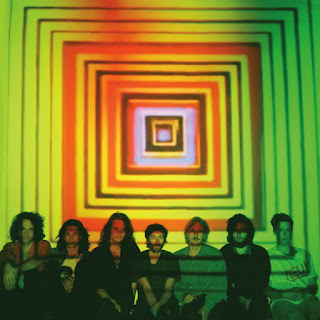 Not more 21st Century psych!
Yip, there is a lot of it about and much of it is of a very high quality, although I'm not sure that a 7 year old track is really that upfront. It doesn't seem that it has been that long since I first heard HeadOn/Pill but it must be as the record states it in black and white 2013. I bought this album on a whim at the time as the name of the band appealed to me, King Gizzard and The Wizard Lizard.  Head On/ Pill is a 16 minute epic trip of a track that seems to be over in about half of that time. It has been released as a stand alone 12" on two occasions, as a picture for RSD 2014 and then again as a coloured 12" last month both of which if you could get a copy will cost you ridiculous money and I'm not sure why as you can pick up the album Float Along - Fill Your Lungs for a quarter of the price on Discogs and you get the bonus of an extra 7 tracks.
King Gizzard and The Lizard Wizard - Head On/Pill
Posted by drew at 10:52