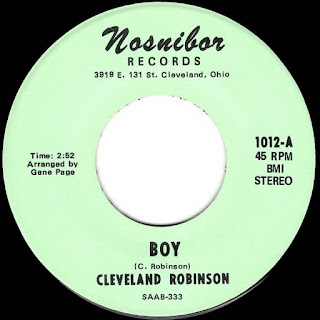 Cleveland Robinson born in  Macon, Georgia, raised in Pittsburgh then in the early 60s he moved with wife to Cleveland, Ohio where he recorded 15 singles and one album. His first single These Are The Hands after being picked up by the Ascot label caused interest from a few major labels, undeterred when none of the deals came to fruition, Robinson decided to start his own label, Nosnibor Records to release his music, he was now singer/writer/producer and label owner. Boy featured here was the 12th release on the label, another great soul side that failed to set the heather on fire but would set you back at least £250 if you were lucky enough to find a copy.

What a great track. £250 though? A quick look at Discogs tells me that I could pick up an original copy of the LP......for £654.50. Just flicked through a few more of his tunes. This guy's work need compiling and reissuing.

Hi Drew I just popped by to say hello. I'm going to try and read blogs more as I attempt to fall in love with music once again.
Never heard thus track before today. It's rather good.
Swc.