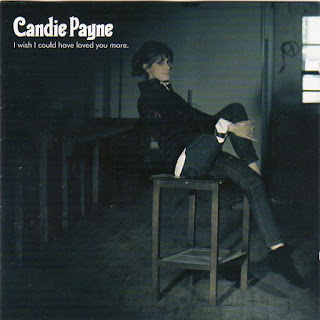 Candie Payne's only album to date, I Wish I Could Have Loved You More, released 11 years ago has really got under my skin recently. When I first bought it I was quite disappointed as I thought that apart from a couple of really good songs it was a bit "meh" as the cool kids and Comrade Colin back then would have said. But over repeated plays over the past month or go the subtleties of the album have really appealed. The influence of Dusty and Nancy are all over the album but it's not just a 60's pastiche, well mostly it is but it is a very good one and for me stands up to the other purveyors of that sound at that time very well.

Around the time of the release of the album I saw Payne perform at King Tuts and I have never seen anybody more nervous on stage, she was visibly shaking when she first came on but by a couple of songs in she seemed to have calmed down although she didn't set the heather on fire she was very good.

I wonder why she hasn't released anything else.

This is new to me and I can't understand that I never heard anything by her before. And I can imagine that she is great on stage.

That is rather good Drew

There was a Paul Weller connection too if I recall correctly? But, yes, would loved to have heard more from her...